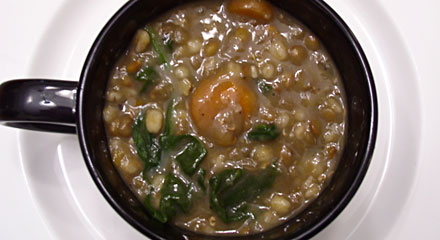 Based on a recipe by J. Raymond

Thick enough to be called a stew, this hearty soup is easy to prepare and cooks in a single pot. Add more water or stock if you wish to have a thinner soup.

Place all ingredients except salt into a large pot and bring to a simmer. Cover and cook, stirring occasionally, until the lentils and barley are tender, about 1 hour. Add salt to taste and spinach, if desired. Cook briefly until spinach is wilted but still bright green.

Pearl barley is the variety most commonly sold in supermarkets. Natural food stores offer hulled barley, which is slightly less refined and cooks in about the same amount of time.

This soup can also be prepared in a crockpot. If you start with boiling water it will cook in 1 to 2 hours; with cold water, 5 to 6 hours

To cook in a pressure cooker, put all ingredients except salt and spinach into cooker and bring it to high pressure. Cook at high pressure for 12 minutes; then bring pressure down with a quick-release method. Lentils should be cooked, but barley may not be completely tender. Cook until barley reaches the desired state of tenderness, about 15 minutes, adding water if a thinner consistency is needed. Then add salt and spinach, if desired. Cook briefly until spinach is wilted but still bright green.